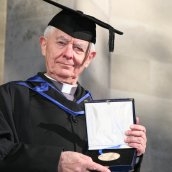 We warmly congratulate Father Brooke.﻿
Posted by Unitas at 12:45