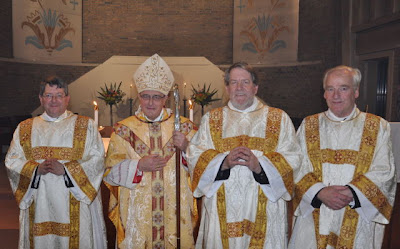 We warmly congratulate the Revd John Broadhurst, the Revd Andrew Burnham and the Revd Keith Newton on their ordination to serve in the sacred order of deacons in the Catholic Church today, 13 January 2011, at Allen Hall. The three who will form the founding clergy of the Ordinariate, were presented for ordination to Bishop Alan Hopes by Mgr Seamus O'Boyle, Vicar General of the Diocese of Westminster, with the insertion of the words 'with the approval of the Holy See.'

The prayer created by the Sacred Congregation for Divine Worship giving thanks for previous ordained Anglican ministry used in the past by Cardinal Hume was not employed.
Because the Ordinariate is not yet formally announced, the deacons are not 'acephalous clerics' nor of the diocese of Westminster. They were ordained under the direct authority of the Pope, the Archbishop of Westminster through Bishop Hopes acting on his behalf.

At the end of the Mass, the Bishop offered a prayer of thanksgiving and blessing over Mrs Broadhurst, Mrs Burnham and Mrs Newton.

Allen Hall generously arranged a reception afterwards, kindly staffed by students of the seminary. On behalf of the three newly ordained, the Revd Andrew Burnham proposed a toast in gratitude to the Seminary staff and students, Fr Tony Philpott, who had preached a fine homily on the diaconate and its grace of service as the core of all the working of the sacrament of Order, the support of the 16 concelebrating priests (many of whom were former Anglicans), the three deacons from the Seminary and the important role of encouragement and guidance played by Bishop Alan Hopes in a journey that has really been in process for six years. In response, Bishop Alan congratulated the newly ordained and proposed a toast to the Holy Father Pope Benedict, whose prophetic vision had brought about this new and hopeful opportunity.

In perhaps the most telling moment of the evening, Fr Roger Taylor, the Vice Rector, led the Seminary in singing Ad Multos Annos, traditionally sung to bid farewell to those leaving its precursor at Douai to go to their new ministry in penal times, when the prospect of danger and martyrdom were real. While the challenges and sacrifices today may be of a different nature, it was a poignant reminder of the Catholic Church's historic witness to the apostolic faith, the unity of the Church, the Mass and loyalty to the Apostolic See of Rome into which the three were now entering as servants and participants, and a moving sign that they were warmly embraced in the fellowship of the Church's ministry today and made part of a precious inheritance.

This picture taken during the Litany of the Saints is reproduced from the Ordinariate Watch blogsite with grateful ackonwledgement to our friends there. 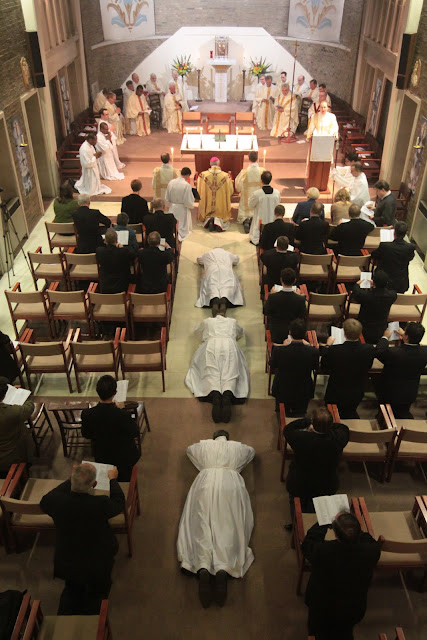 
Week of Prayer for Christian Unity